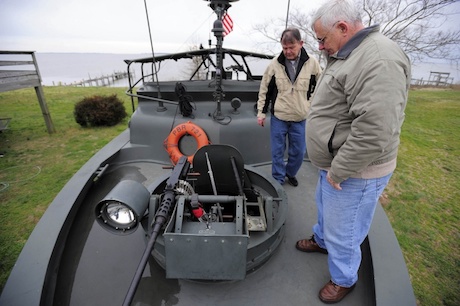 CURRITUCK — Dennis Ambruso and his friend Pat Doyle stand aloft the PBR 721, a restored Vietnam-era river patrol boat. The two men point to various instruments, guns, the engines and the like, admiring the work that Ambruso says took him nearly 10 years to complete.

“There was nothing on the boat but this frame,” says Ambruso, pointing to the frame that holds up a canvas canopy. “No wires, no gauges, no engine, no nothing.”

When he found the old Navy patrol boat, it was simply a stripped down hull with a frame. But Ambruso, 64, was no stranger to restoring military surplus machinery, so he knew that eventually this boat would be back in prime condition, a showpiece that recalls a different time.

Ambruso was living in Bridgeport, Conn. He had served in the Navy during Vietnam, and had worked as a marine technician in the civilian world for most of his career.

His passion, however, has been military history. He had been a re-enactor for Revolutionary War events, Civil War events and World War II events. Ambruso had also restored seven tanks, a number of other vintage military vehicles and was a co-founder of the Military Museum of Southern New England in Danbury, Conn.

Ambruso was immersed in the world of military history, surplus and memorabilia.

But it was back in 1990 when a river patrol boat from the Vietnam era would come into his life.

This 31 ft. boat was the first one built in 1972, thus the number, 721. It was a training boat for the Navy and never actually saw combat in Vietnam. It is also the same type of boat seen in scenes from the Francis Ford Coppola classic, “Apocalypse Now.”

Ambruso had been dealing in military surplus items when he came across it. In a brochure, a company was selling four PBRs in Mississippi. Along with a friend, Ambruso put a bid in for all four boats at $2,300 each.

The pair took the boats and in the end Ambruso was left with his hull and frame. He hauled the shell back to New England where it sat for nearly nine years while Ambruso searched for parts.

The plan was to find all of the surplus parts he could and restore the boat to its original glory.

Ambruso had an indirect history with the boats, serving on a battleship in Vietnam as a gunner assigned to supply cover fire to the patrol boats. So for the Navy veteran, this job would be a labor of love. But what Ambruso wouldn’t know until the end, was that love could be a whole lot of work.

“This is the cutting edge of restoration hobby,” Ambruso said. “This is my biggest achievement.”

First Ambruso went to Naval Amphibious Base Little Creek in Virginia Beach, Va. There he was able to visit with Special Boat crews while they were stripping down old PBRs.

The PBRs are still being used by foreign navies so when these guys at Little Creek stripped an old boat, the parts would go to those countries.

That would be, Ambruso would soon discover, a small problem for him. But first, he would learn as much as he could from the guys at Little Creek about his boat before moving on to Pennsylvania where he would search for the parts.

The company in Pennsylvania, however, told him that he couldn’t purchase those parts. They were contracted to go to the foreign navies who had purchased the old boats.

But Ambruso wouldn’t let that get him down. As a marine technician, he’s also a trained draftsman. He was able to take measurements and create drafts of the parts.

Ambruso would machine his own parts in order to restore his boat.

In the process of restoring the boat, he also had to restore the hull. The hull is fiberglass so Ambruso gathered up 150 gallons of resin and many bolts of fiberglass cloth and got to work.

Next he made the decks. Then the parts such as the engine, the wiring, communications and all of that little stuff that go together to make up a 440 horsepower patrol boat capable of a top speed of 27 knots (about 30 mph) had to be put in, including gun mounts and replica guns — an M-60, a grenade launcher and .50 caliber guns.

“It took about three and half years to put it together,” says Ambruso.

And when he says it, you can see a combination of pride and a hint of exhaustion in his expression.

The only thing left was to install the propulsion system. The PBR boats were originally propelled through the water by two Jacuzzi jet propulsion systems. Ambruso quickly discovered that one system would cost him $18,000 alone and it would likely last two years in the water, he says. And that would mean replacing the jets at $36,000 every two years.

Ambruso had sold the last restored tank he owned for $40,000. He used that money to complete the restoration of the boat. He couldn’t envision spending $36,000 on jets, so he turned to propellers.

He had the props specially made for the boat. They are designed like paddle wheels, giving him more force, he says.

The PBR river patrol boats were used in the Mekong Delta, patrolling the waters of Vietnam during 12-to-14 hour shifts. The sailors on these boats manned the machine guns, engaged the enemy and relied on the swiftness of that vessel.

With the flip of a switch and a skilled pilot at the helm, Ambruso and his friend Doyle say that boat could do a 180 degree turn right smack in the middle of the river while traveling at full speed.

This machine was a highly useful tool of war during the Vietnam conflict.

“This is beautiful,” Doyle declared as he admired Ambruso’s boat.

Doyle had been a part of Operation Game Warden, the Navy’s designation for the group that patrolled the river ways of Vietnam. He had ridden in the boats during the war, but his primary job was shore gunner.

“My job was to protect them,” says Doyle of the boats and the men that operated them.

Doyle is a part of the Mid-Atlantic Game Wardens Association, the group of Vietnam vets that served on and around the Mekong Delta for the Navy. It is for groups like this that Ambruso has created this boat.

The boat was completed and put in the water in 2002. Ambruso says he has used it for memorial services and burials at sea.

He moved it to Currituck County last month, and with the help of his friends like Doyle, he plans to make it available here for veterans, memorials and the like.

The boat is currently on a trailer, but it will soon be moored at Lamb’s Marina in Camden County, Ambruso says.

For more information about PBR 721, go to Ambruso’s website, www.pbr721.com.